A magician never reveals his secrets… most of the time. 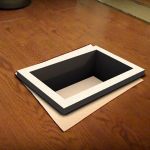 Simply import the package below into Unity and take a look at the included prefab. This example will work perfectly with both String and Qualcomm’s augmented reality solutions for Unity.

If you receive an “ImportFBX Warning” just ignore it.

(P.S. switch the Texture Format of the CasketShadow.png file to RGBA 32 bit to improve the appearance of the shadow around the rim of the opening)